3D Printing Could Save Coral Reefs

It’s no secret that coral reefs are being dramatically--and negatively--affected by climate change. Ocean temperatures are rising and in these warmer waters, increasing acidification is leading to coral bleaching and death. And when corals die, so too does the life that depends on them… that is, a whole 25 percent of all ocean life.

While coral reefs make up only 0.2 percent of our oceans, they’re home to a quarter of all ocean life, including algae, zooplankton, fish, crabs, sea turtles, and more, and they protect coasts from erosion and storms. It’s estimated that half a billion people worldwide depend on coral reefs for food or income. If enough reefs start dying, it’s easy to see how there could be very severe consequences not only on ocean life, but also on these people who make their livelihoods from ocean and coastal tourism.


In the past, researchers have scrambled to find ways to combat ocean acidification or create artificial reefs for coral and other species to make a home. Sinking ships or dropping concrete blocks into shallow waters provided enough of a rock-like surface for coral to grow but now there’s an improved approach: 3D printing.


On the island of Bonaire, the Harbour Village Beach Club has teamed up with ocean preservationist Fabien Cousteau, grandson of the famous Jacques Cousteau, to 3D print artificial coral. Identical in size, shape, texture, and even chemical structure to actual reefs, these scientists are making fake corals that will attract baby coral polyps to live in and eventually build on the artificial coral. It’s better than the sinking ships and concrete blocks methods because scientists can imitate the reefs exactly, providing a more suitable environment for the baby coral to grow. 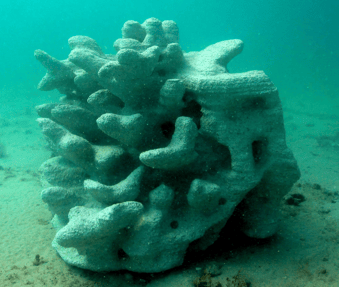 “3D printed corals can generate real change and establish real growth for reefs, on of the key attractions for visitors and divers alike in Bonaire,” said Cousteau. “This technology is less labor-intensive than current coral restoration processes, creating a larger impact in a shorter amount of time.”


However, some scientists aren’t even sure if the 3D reefs will save coral in time, and wonder why more thought isn’t being put toward dealing with rising acidification, the reason that coral reefs are dying in the first place. Reef designers’ responses to the naysayers? Making their 3D coral out of calcium carbonate. Over time, the coral would dissolve, diminishing the amount of acid in that area (at least for awhile).

Of course, there’s still a lot of work that needs to be done. But in the face of an environmental crisis, 3D reefs are a quick remedy to an escalating situation and could promote a much healthier ecosystem for endangered reefs.


Do your part for the environment and go solar today! You’ll significantly lower your carbon footprint and help to fight against global warming and ocean acidification. Contact us at 407.331.9077 to learn more!