How is Solar Energy Made into Electricity?

Solar energy is a green alternative to powering your household. It is also can be much cheaper than other methods to power a home. By installing a system, you can switch from expensive electricity from the grid, to affordable, almost inexhaustible energy. Unlike gas, solar energy does not go up and down in the market and once installed, your electric bill can expect to drop.

How is Solar Energy Made? 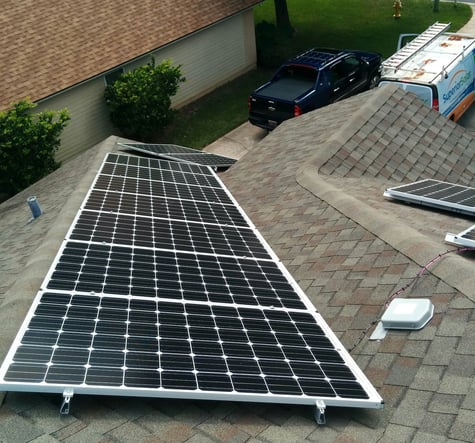 Sunlight contains potential energy; this energy is usually released as heat, as anyone who has touched something that has been left out in the sun will know. If this energy hits a certain material it can be turned into an electrical current instead of being released as heat. How solar energy works is through the use of solar panels made from these specific materials. These panels are placed in areas, around your home, that get the most sunlight during the prime hours. The most common area is on top of your roof. The goal is to find the best place, where there is little to no shade at the time the sunlight is at its prime.

Found inside these panels are photovoltaic cells, which contain semiconducting material. This material is most often found to be silicon based and is formed into film. The cells contain both a positive and negative layer of the semiconductive material found under a layer glass.

As sunlight hits the panel it is absorbed. This causes electrons to be knocked off the semiconductor, by photons, instead of wiggling around in one place creating heat. A photon is a sort of energy found in the sunlight. Electrons are negatively charged particles found in atoms. Since the electrons are negatively charged particle, they will be repelled by the negative end of the semiconductor and sent in the direction of the positive end. Because the semiconductor has a positive and negative end, all electrons will travel in the same direction creating a current of electricity.

What is DC vs AC?

The amount of energy released from the sun, as its rays hit the surface of the Earth, is massive. Using the solar panels, we have found a way to harness this power and use it. Solar energy is quickly becoming the future way to power homes and businesses. As a green alternative to fossil fuel and its inexpensive way to power a home, the sun is a natural energy provider. Not only does it not release carbon dioxide, it doesn’t run out of energy and it also happens to be a free source of energy. To learn more about how solar works, contact Superior Solar today.