The State Of Solar Power Construction And Installation

The truth about solar power in the marketplace

By WAYNE WALLACE | Special To The Tampa Tribune Published: October 10, 2012

As a solar contractor, I was dismayed to hear disparaging comments about green energy during the Denver debate. I'd like to set the record straight.

Let's be honest: We are not dealing with a level playing field. Oil companies have enjoyed rich subsidies for more than 100 years. The first coal subsidy dates back to the late 1700s.

Mitt Romney's statement, "In one year, you provided $90 billion in breaks to the green energy world… that's about 50 years' worth of what oil and gas receives," is false. Actually, the clean energy investment took place over several years. The tax breaks that oil companies receive are different from the loan guarantees, grants and R&D provided through the stimulus. Only a portion of the money went to solar and wind; it was also used for energy efficiency, environmental cleanup and improvements to our power lines. Unlike tax breaks for oil companies, the loan guarantees are repaid with interest. In fact, Tesla just announced they would be making their payment early.

This months issue of Paradise News features an article by our very own VP Rick Gilbert! Check out "Florida Needs to Get Solar Serious!" starting on page 20...

I attended the Solar Power International conference in Orlando a couple of weeks ago and learned something interesting about the roof of the building where the conference occurred. 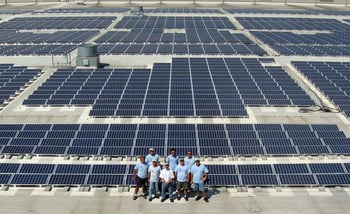 The Orange County Convention Center in Orlando is the second largest such facility in the US. My sore feet will attest to that fact after walking many miles through the exhibits. The roof of the Center is the surface for a big solar panel array. The capacity of this solar farm in downtown Orlando is almost 1.1 Megawatts.

James Doyle is a senior project manager for Solar Source, the Largo, Florida based company that designed and installed that solar power system in 2009. According to Mr. Doyle, the Orange County Convention Center’s average power bill is about $1 million a month. That’s a lot of electrons.

The solar panels on the roof save the Center between 10% - 12% of that power bill, month in, month out. It’s an impressive savings. But even more impressive is how much the economics for solar systems have improved since that system was installed.

Some homes that are being built in Clearwater for Habitat for Humanity will be getting solar hot water systems. The installations are provided for families in need.